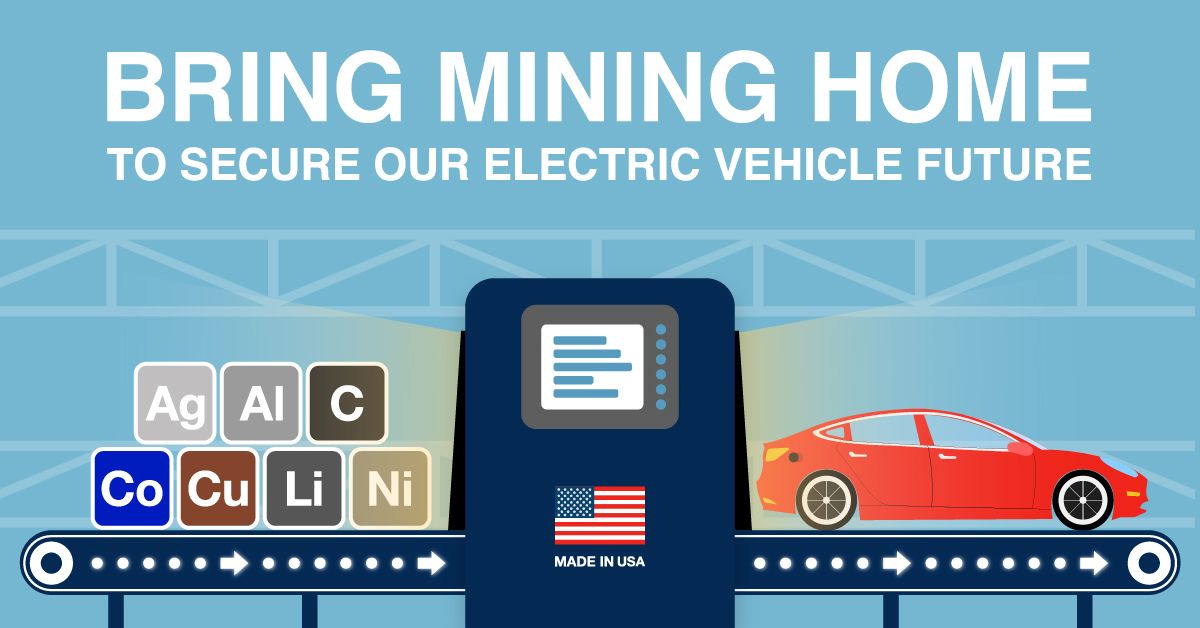 Provisions included in the most recent version of the House Natural Resources Budget Reconciliation Act threaten the United States’ role in the global race to electrified transportation. As the world transitions to meet emissions-reduction goals, consumer interest in electric vehicles (EVs) is on the rise and is forecasted to exponentially grow over the next several decades. American automakers are all-in on electric vehicles, but limited access to the metals and minerals needed for them and overreliance on foreign supply chains foreshadows a coming supply crisis. Some estimate that, by 2030, automakers will be unable to immediately fulfill up to 35 million expected EV orders.

Should the new tax increases proposed in the House bill proceed, they will serve as a concrete obstacle to the U.S.’s goal to build the domestic supply chain needed for an electric future, pushing jobs abroad and further weakening our domestic minerals supply. Bringing mining back home will allow us to better control our supply chains, rebuild the U.S. economy and lead the electrification era.

The Natural Resources Budget Reconciliation Act proposes gross royalties that are unworkable in an industry that has uniquely high upfront costs to produce a saleable product. With prospects for projects saddled with new uneconomic taxes, project investors will inevitably look abroad, further increasing our reliance on foreign sources of minerals. The United States’ mineral import reliance has already doubled over the past 25 years, with the U.S. now importing 100 percent of 17 key minerals and more than 50 percent for an additional 29 key mineral commodities, despite having abundant domestic mineral resources.

Automakers recognize electric vehicles as the future of transportation. A recent BloombergNET report anticipates that the number of EVs is expected to skyrocket from 8 percent of all cars on the road in 2030 to 31 percent just a decade later.

Ford Motor Company is a prime example of this shift as they recently announced a $7 billion investment in EVs, part of the company’s more than $30 billion dedicated to EV development through 2025. “This is our moment – our biggest investment ever – to help build a better future for America,” said Jim Farley, Ford president and CEO. “We are moving now to deliver breakthrough electric vehicles for the many rather than the few.”

Consumers are excited about the promise of high-quality, American-made electric vehicles. Ford’s F-150 Lightning is completely sold out in Europe, the U.S. and China, according to Farley. Unfortunately, EVs are not currently affordable for the typical American. “Average people cannot afford these vehicles and we have a lot of work to do to make them more affordable,” said Farley. “That’s the one that keeps me up at night.”

Insufficient supply of key minerals like lithium and nickel is getting in the way of manufacturing EVs and transitioning to reduced emissions transportation. Rystad Energy predicts demand for high-grade nickel will outstrip supply by 2024 and expects a lithium supply deficit by 2027.

Farley believes that EV battery production must come back to the U.S. to bring costs down. Ford is investing in that future reality with two new next-generation plants that will produce the electric F-Series trucks and the batteries to power them. But the supply chain must come full circle starting at U.S. mines. “We have to bring battery production here, but the supply chain has to go all the way to the mines. That’s where the real cost is,” said Farley. “We have to solve these things and we don’t have much time.”

With a strong domestic supply chain, the United States could lead the electric vehicle revolution. Punitive tax proposals, like those in the House Reconciliation bill, would take the U.S. out of the race. We must ramp up mineral production to meet soaring demand coming from infrastructure reinvestment, the energy transition and the growing electrification of transportation.

Fortunately, there is a path forward. The U.S. mining industry is ready to work in a bipartisan way to support a compromise that won’t jeopardize U.S. mineral production and EV future.

Click here for more information about opposing the reconciliation act.