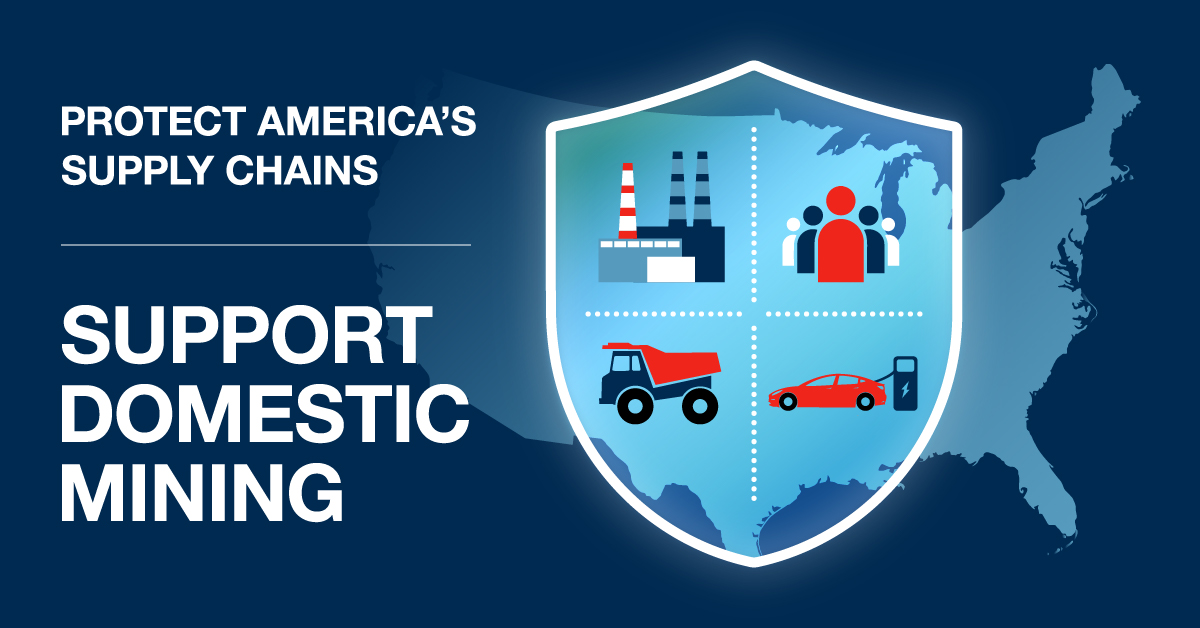 The House is threatening to weaken the U.S. mining industry, applying further stress on our domestic supply chains, job creation and economic recovery with the Natural Resources Budget Reconciliation Act. Specifically, the legislation contains proposed royalties and fees on hardrock mining and land withdrawals that would crush domestic mining, leaving the United States even more dependent on and vulnerable to foreign sources.

The legislation couldn’t come at a worse time, when access to our mined materials has never been more critical. The International Energy Agency and the World Bank project mineral demand growth of more than 1,000 percent. This is largely due to the anticipated investments and evolutions in transportation and infrastructure. If the reconciliation bill is passed as it currently stands, it could leave the U.S. sitting on the sidelines of global economic recovery and the race to electrification. Failing to meet this era-defining moment is simply not an option.

How Will the House Bill Affect U.S. Mining?

New Taxes Will Impede the Success of American Mining

These new fees ignore the extensive taxes already imposed on U.S. mining companies. In 2019, domestic mining generated about $18 billion in taxes. Not including the new fees, the total royalties, taxes and fees for mining operations in the U.S. is between 40 to 50 percent, similar to other major mineral producing countries. The proposed fees would push the U.S. above the upper limit of that range, thus impairing our global competitiveness and adversely affecting employment and tax revenues.

The proposed legislation would also further limit federal land from which mined materials can be extracted. Currently, new mining operations are either restricted or banned on more than half of all federally-owned public lands. While mining is not appropriate on all federal lands, caution should be exercised when determining whether additional lands should be placed off limits. Our domestic mineral supply chain relies heavily on federal lands to meet our nation’s needs. Western states with the largest proportion of federal lands provide approximately 75 percent of our domestic minerals.

In most cases, banning new mining claims is unnecessary. There are already laws in place to protect national lands, including environmental requirements and land use planning processes, that get the job done.

A recent Morning Consult poll reveals that nearly 9 in 10 Americans feel it’s important that the raw materials used for bridges, roads and other projects be sourced domestically. Unfortunately, we’re a far cry from that reality.

The United States’ mineral import reliance has doubled over the past two decades. Our country now imports 100 percent of 17 key minerals and more than 50 percent for an additional 29 key mineral commodities according to the U.S. Geological Survey (USGS). Depending on other countries for minerals makes us vulnerable to the whims of other governments. This could hinder our access to the minerals necessary for manufacturing items critical to our quality of life, including remote work technologies, building materials, electric vehicle batteries and more.

Punitive proposals like those in the House bill are counterproductive. The mining industry is already heavily taxed and existing laws are usually more than adequate to protect special areas. As the Natural Resources Budget Reconciliation Act moves forward, lawmakers must recognize that domestic mining is foundational to our infrastructure, economy and national security. Elected officials should reconsider the proposed fees and limitations on the mining industry, putting in its place thoughtful legislation that will help secure our nation’s economic recovery and prosperity for years to come, not destroy it.

Compromise is possible. The mining industry is open to reasonable royalties that aren’t punitive. Working together in a bipartisan way, we can assemble a package that recognizes the unique business of hardrock mining and we can come together on a bill that meets the country’s needs without jeopardizing the mining foundation of our nation.

Click here to take direct action now
Congress | mining
Mining is “the one basic industry that could make a decisive contribution in the transition to a green economy,” sa… twitter.com/i/web/status/1…