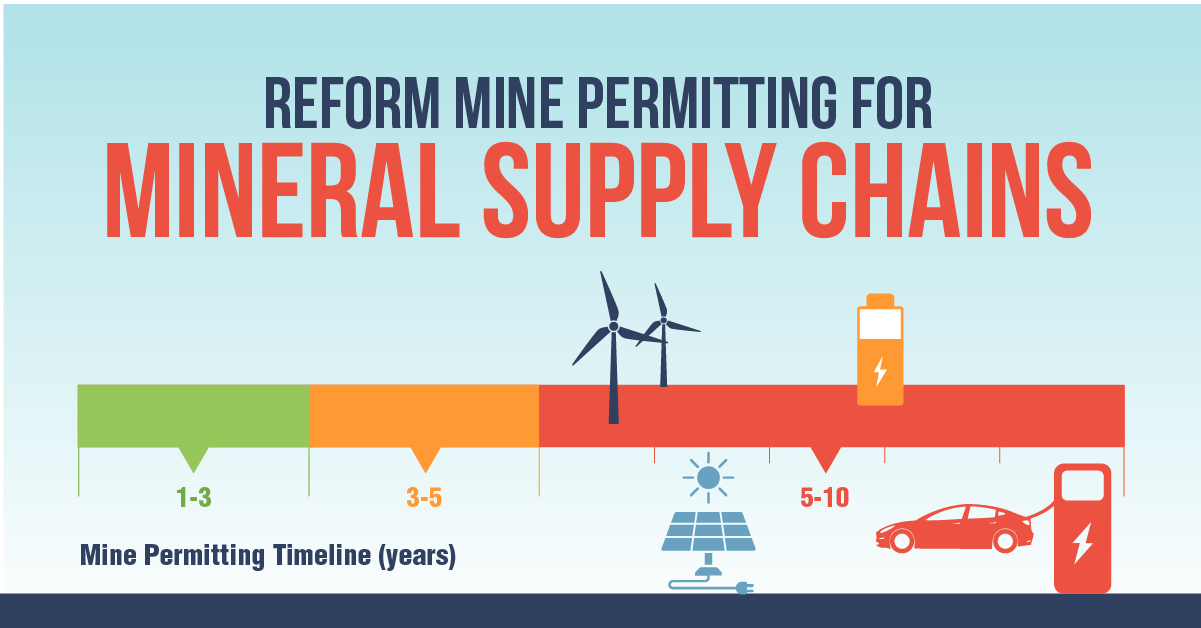 For decades, the U.S. has been grappling with its overreliance on foreign countries for minerals, and how an unwieldly mine permitting process handicaps our ability to meet our mineral needs with domestic resources. We are now at an inflection point where we must address this issue, and the skyrocketing need for domestic mining, head on.

The confluence of several events, including several permitting reform proposals in Congress set against the backdrop of an Interagency Working Group (IWG) on mining – which is reviewing U.S. hardrock mining laws, regulations, and permitting policies and plans to make recommendations this November – makes this moment in time make-or-break, both for the mining industry and for this administration’s climate, transportation and supply chain goals.

In its earliest days, the Biden-Harris administration signaled the importance of mining with its supply chain review, which revealed what we already knew: we must do vastly more to secure domestic sources of the minerals needed by our technology, manufacturing and energy sectors. Since then, the administration and Congress have incentivized the use, production and processing of domestically mined materials through multiple mechanisms including the Defense Production Act, loans from the Department of Energy, minerals sourcing provisions in the Inflation Reduction Act and in other ways.

While these are positive actions, at the same time, we have yet to see large projects move forward in the permitting process. Even some of the projects that hold significant potential to serve as much-needed domestic sources of everything from copper to nickel and cobalt have been blocked.

The Potential for Obstruction

The Department of the Interior-led Interagency Working Group (IWG), which was created to seek stakeholder input and provide recommendations on reforming mining laws, regulations and permitting policies, could further obstruct mining at the very time when the administration’s policies should be doing the opposite.

The recently closed IWG comment process revealed that environmental groups and non-governmental organizations see the IWG’s charter as an opportunity to further complicate and slow down an already cumbersome permitting process. Their flawed focus is on a complete re-write of the General Mining Law to include duplicating the already strong existing environmental laws that guide American industry and changing the fundamental way mining is conducted on federal lands. If the IWG truly wants to “promote the sustainable and responsible domestic production of critical minerals,” as stated in the announcement of its formation, it should recognize what works in the current system and focus on addressing the major flaws in our permitting process.

A Dire Need for Permitting Reform

The U.S. needs to take a proactive, wide-ranging approach to secure mineral supply chains, and domestic mineral production must be at the center of that strategy, which also includes recycling and some sourcing from allies. But that can’t happen under the current permitting process that prevents us from timely access to our own resources to meet the exponential growth in demand for minerals. The U.S. must revamp its mine permitting process to eliminate purely bureaucratic delays caused by a lack of coordination among agencies and federal and state authorities, duplicative requirements and absence of firm timeframes. The IWG should acknowledge these bottlenecks as well as industry-recommended solutions that can address these delays without sacrificing our world-class environmental and safety standards.

The IWG appears committed to a November timeline for making recommendations on a path forward for mining in the U.S. – a timeline that is so perilously condensed it should raise concerns by all stakeholders. Thankfully, at the same time, members of Congress on both sides of the aisle seem to agree the time for action is now.

Permitting Reform Must Be Done Aggressively and Wisely

Recent weeks have seen permitting reform proposals from Senator Joe Manchin (D-W. Va.), Sen. Shelley Moore Capito (R-W. Va.), Rep. Bruce Westerman (R-Ark.), Rep. Pete Stauber (R-Minn.) and others. While proposals differ, the common recognition of a need to enact serious changes to our permitting processes immediately to keep up with new energy market demands and infrastructure goals is significant. Each of these proposals should consider steps that would reduce the burdensome regulatory process without compromising the environmental rigor contained in the process, including:

There’s no debate around the fact that we are living in the most mineral-intensive time in history. While recycling and some ally sourcing will be legs of our strategy, they will not get us where we need to be to secure our domestic supply chains. Over the last 50 years, Congress and the federal government have acknowledged the dangers of overreliance on foreign minerals. The government has acted in broad strokes to address our alarming import overreliance, but it hasn’t been enough. We need targeted action to restore U.S. mining’s competitiveness on the global stage. As mineral demands skyrocket with the ever-intensifying uptake of electric vehicle and alternative energy technologies, minerals are set to be the next currency as countries work to shore up their supply chains. With the guidance of industry experts, it is now time for the federal government to execute mine permitting reform to secure our minerals future.

If done correctly, permitting reform legislation from Congress, along with recommendations from the IWG that do not upend the way we mine in the U.S., could present the opportunity to get us back on track by maintaining existing rigorous environmental standards while addressing our self-imposed permitting bottlenecks. But if approached from an anti-mining perspective, these actions hold the potential to derail virtually every aspect of the administration’s agenda. The U.S. mining industry has already engaged Congress and the IWG and stands ready to work to ensure our supply chains are secured with the abundant natural resources we have here at home, and are produced in accordance with the top environmental, safety and labor standards in the world.

Congress | minerals | mining
Mining is “the one basic industry that could make a decisive contribution in the transition to a green economy,” sa… twitter.com/i/web/status/1…