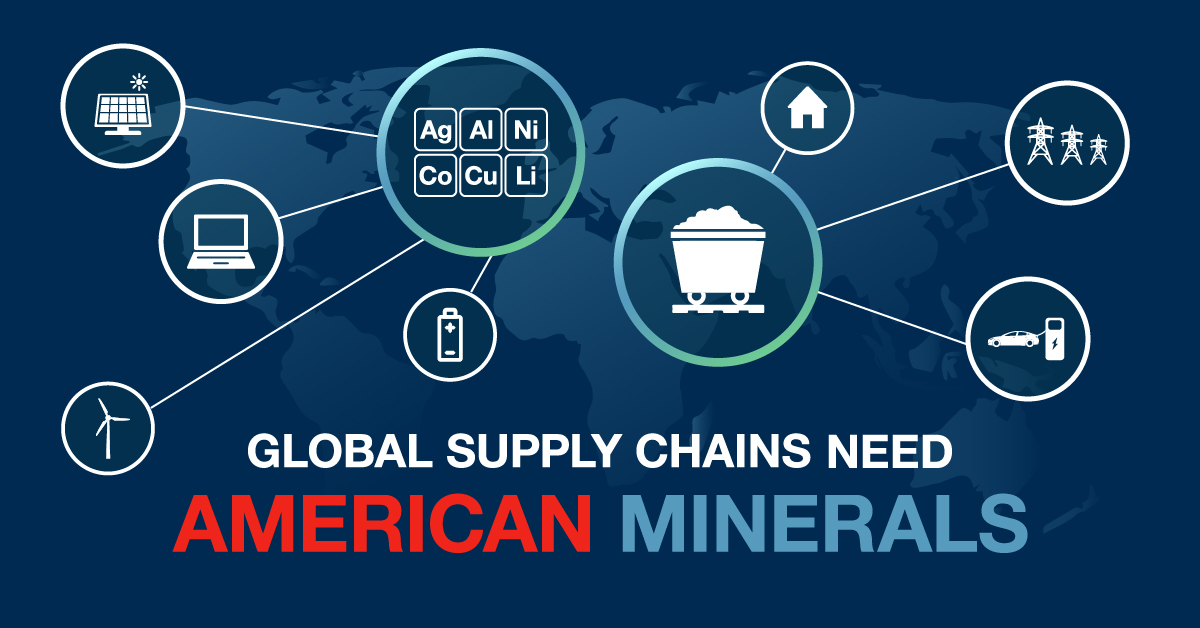 The delicate nature of global supply chains was something many of us took for granted before the COVID-19 pandemic. Two years later, we now have a clear picture of just how precarious our extensive reliance on over-extended supply chains has become. It’s time to address this vulnerability head on by strengthening federal procurement requirements for domestically produced minerals and energy, ensuring access to mineral resources on federal lands, addressing mine permitting delays, and working to ease infrastructure chokepoints that keep U.S. minerals and energy from the marketplace.

Affordable, reliable energy for all

The world is facing an energy crisis unlike anything seen since the 1970s. Energy security is once again a global priority and production of essential resources in reliable, secure nations is of critical importance. As Americans struggle with soaring prices at the pump and with natural gas prices that have doubled in a year, battling energy-driven inflation is prompting an energy policy reset that leans into our vast domestic resources.

Coal generating capacity is now being embraced as an important bridge to Europe’s energy future as it looks to break Russia’s stranglehold on Europe’s energy supply. Recognizing the overlooked value of our own coal fleet and the balance and reliability it provides to the U.S. electricity grid should be part of our reset. We must also recognize the importance of American coal production, produced with the highest safety and environmental standards, to U.S. energy security and the energy security of our allies. With the world’s largest coal reserves, the U.S. is in a unique position to use coal to anchor a carefully managed transition to our own energy future. And those same vast reserves can help meet the energy and steelmaking needs of allies as the world pivots away from Russian resources and tries to shield itself from unprecedented energy market volatility.

It’s not just Russian natural gas and oil Europe must replace. Europe also relies on Russian coal to meet half of its demand. Fortunately, by one estimate, U.S. and Australian exports can replace much of Europe’s coal supply from Russia this year. With the right kind of policy support that encourages U.S. production and addresses bottlenecks on railways and at our ports, U.S. coal exports could replace even more.

Minerals are invaluable parts of the supply chain used to create all manner of goods, including batteries, medical devices and even weapons systems. There isn’t a new, cutting-edge energy technology today that doesn’t use minerals in its development. Solar, wind, geothermal, batteries and even carbon capture technologies require minerals during production. The U.S. is currently disproportionally dependent on foreign countries for access to essential minerals. But we don’t have to be.

Our ability to support the next generation of technologies shouldn’t be left in the hands of foreign governments, particularly our adversaries and rivals. The expansion of domestic mining should be the highest priority for our elected officials. Minerals support the development and deployment of the technologies that are critical to our future, and can sustain secure, responsible supply chains that aren’t subject to geopolitical influences. We have vast domestic resources and a world-class mining industry. What we need is the political will to ensure our miners can get to work and reverse our alarming mineral import reliance.

With your help, we’re increasingly seeing that political will for an American mining renaissance come to life. The current crisis is driving new awareness of, and bipartisan support for, growing domestic mineral supply chains. President Biden’s State of Union address emphasized that made-in-America needs to happen from beginning to end. Of course, the beginning of nearly every supply chain is mining.

And just a few weeks ago, Secretary of Energy Jennifer Granholm, speaking to the electric vehicle revolution, expressed her support for streamlining mine permitting, telling attendees at an energy conference, “It takes forever to get a new permit. How crazy is that?”

Senators Lisa Murkowski (R-AK) and Joe Manchin (D-WV), Chairman of the Senate Energy and Natural Resources Committee, also recently wrote to President Biden calling on him to invoke the Defense Production Act to double down on the urgent work to build the mineral supply chains needed for battery metals and materials needed for national security.

These are just some of the examples of the smart, bipartisan focus on reshoring mining and building the 21st century industrial base our nation needs. The era of overreliance on global supply chains that are stretched to their breaking point and are deeply vulnerable to supply disruptions and controlled by our rivals, is coming to an abrupt end. America and our allies need homegrown, responsible and secure material and energy supply chains. We have the resources. It’s time to get to work.