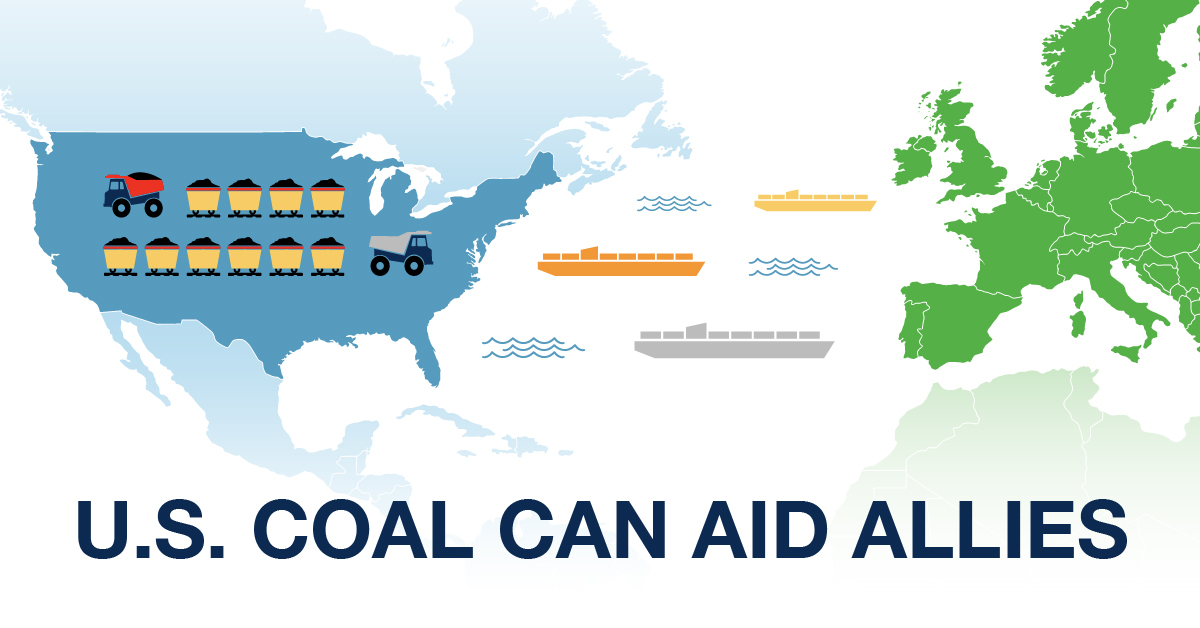 As countries deal with the effects of the energy crisis in Europe due to Russia’s invasion of Ukraine, skyrocketing natural gas prices and supply issues, they need affordable, reliable coal to meet their energy demands. Across Europe, allies are reopening shuttered coal plants or abandoning plans to retire coal capacity.  Coal is essential to helping Europe pivot away from Russian energy and U.S. coal is playing a key role.

The U.S. is home to the world’s largest reserves of coal. A recent national poll shows that American voters support using our vast resources to help meet our allies’ needs. Six in 10 voters agree that the U.S. should ramp up coal exports to help our European allies. By increasing America’s coal exports, we can help our trade partners while supporting our economy at home.

U.S. coal exports to Europe have doubled in the last year, but more will likely be needed to replace the loss of Russian fuel.  And that’s going to be a real challenge. The coal industry needs support from policymakers to remove hurdles currently stifling our coal export potential, and now – before the crisis in Europe deepens – is the time to act.

Demand for Coal and Coal Exports Continues to Grow

Before the Russian invasion of Ukraine, about 40 percent of Europe’s natural gas supply and 50 percent of its coal supply came from Russia. In April of this year, Europe chose to ban Russian coal imports after already declaring its intention to slash use of Russian gas. As of this month, Europe will no longer receive its monthly 4 million tons of Russian coal. Now, it must find coal from a tight global market with soaring prices. While exports to Europe are up from South Africa, Columbia and Indonesia, meeting demand as heating season approaches and natural gas rationing begins, will almost certainly require more American coal.

And it’s not just Europe that needs greater U.S. production and exports. The entire global market needs more coal. According to the International Energy Agency (IEA), global consumption of coal will rise by 0.7 percent by the end of 2022. Provided China’s economy recovers in the coming months, this increase in coal usage will match the annual record for global consumption previously set in 2013. IEA predicts that coal demand will likely break that record in 2023. As the world reembraces the value of energy security, coal is once again a linchpin of those efforts.

According to the U.S. Energy Information Administration, U.S. coal exports are up just .8 percent this year despite a global market in desperate need of U.S. energy. While voracious domestic demand is partly to blame, logistical bottlenecks and supply chain challenges are kneecapping U.S. export potential.

American coal companies are facing enormous difficulties getting the coal to the consumer. While many coal producers in the U.S. are trying to ramp up production, they are limited by equipment and workforce challenges, port congestion and, in particular, what rail transport can handle.

Thermal coal from the Illinois Basin and thermal and metallurgical coal from eastern mines traveling through ports at Hampton Roads, Baltimore, Mobile, and New Orleans comprises most of our supply headed to Europe. More coal could make the trip across the Atlantic if policymakers can help clear the supply chain hurdles standing in the way.

As we can plainly see with Europe’s current state of affairs, coal remains essential to an affordable, reliable and secure supply of energy. Let’s not learn that lesson the hard way. The U.S. needs coal to maintain dispatchable fuel diversity and underpin grid reliability and affordability. And our trade partners need U.S. coal exports more than ever to navigate their pivot away from Russian energy.  For our industry to provide all of the support it can to our European allies, policymakers can’t sleep on the pressing supply chain and logistics challenges they can help fix.

coal | energy security | exports
Mining is “the one basic industry that could make a decisive contribution in the transition to a green economy,” sa… twitter.com/i/web/status/1…