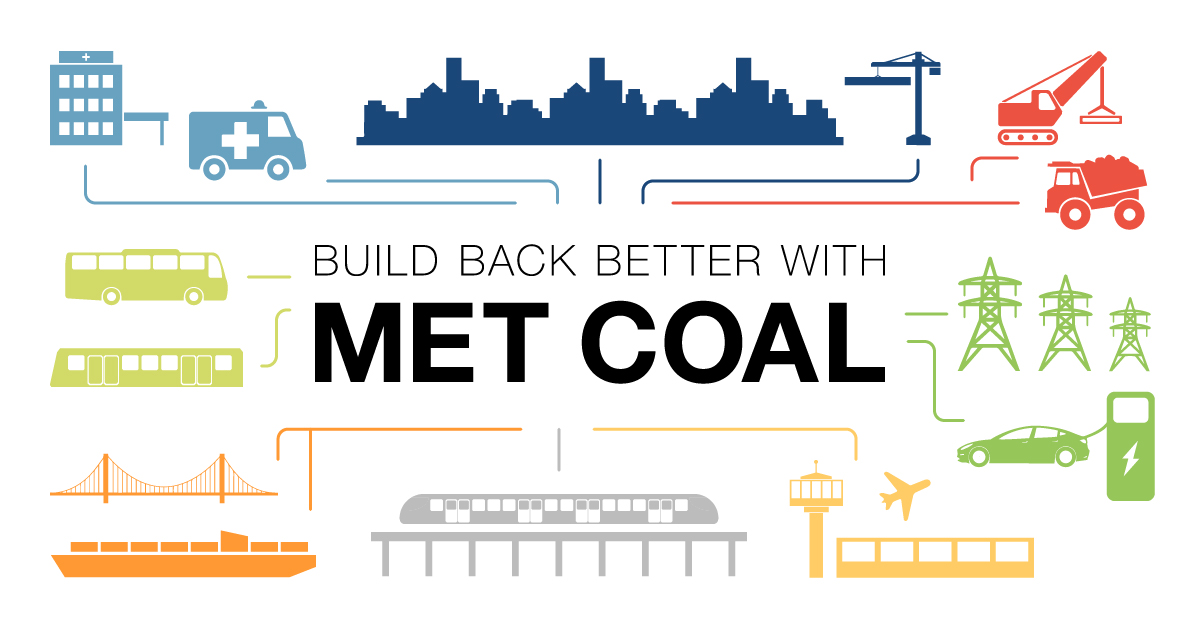 The U.S. is considering the biggest infrastructure investment since the construction of the Eisenhower interstate highway system. To modernize the buildings, transportation and energy systems proposed in President Biden’s $2.3 trillion plan we will need vast amounts of steel.

Manufacturing that steel will count on the unsung hero of America’s infrastructure renaissance: metallurgical coal. And it is our nation’s 175 metallurgical coal mines, directly employing 13,000 miners, that will be on the front lines of this effort.

What is Met Coal and Why is it Used in Steel Production?

Metallurgical coal, also known as met coal, has been produced in the U.S. for nearly 200 years. Currently, it is mined in Alabama, Arkansas, Pennsylvania, Virginia and West Virginia. The U.S. was the second largest met coal exporter in 2019, supplying 14 percent of the global market.

Met coal is a high-grade of coal that can be used to produce high-quality coke. When heated in a coking oven at high temperatures, met coal produces coke, which is a porous, hard black rock with high carbon content and few impurities. The steel industry uses it to smelt iron ore into iron to make steel. Every ton of steel produced requires approximately 0.6 tons of metallurgical coal. Currently, 70 percent of global steel is produced with met coal.

Why is Steel Critical for Infrastructure?

Steel is one of the most widely used building materials on earth and a critical component of many types of infrastructure including bridges, dams and all kinds of transportations system such as trains, electric vehicles and more. Its high tensile strength, relatively light weight compared to other materials and low cost have made it an ideal construction material for over a century. Steel is also 100 percent recyclable, meaning it can be recycled indefinitely without losing its quality.

How Much Steel Will Biden’s Infrastructure Plan Require?

A lot. President Biden’s $2.3 trillion infrastructure proposal, also called the American Jobs Plan, calls for funding to update 20,000 miles of highways and roads, modernizing water systems, replacing 10 of the most economically significant bridges in the U.S. and repairing an additional 10,000 bridges. The proposal also includes funding to modernize public transit and trains, and budgets billions for electric vehicle infrastructure.

Even renewable energy components of the plan are steel-intensive. The Biden administration hopes to deploy 30 GW of offshore wind capacity by 2030 and doing so will take a tremendous amount of steel. A new wind turbine installation vessel under construction in Texas needs 10,000 tons of Alabama and West Virginia steel. In total, the administration projects seven million tons of steel demand, equivalent to four years of output from a typical mill, just to supply port upgrades, new ship construction and the material needs of domestic factories turning out wind turbine nacelles, blades, towers, foundations and undersea cables.

To put it into perspective, for each $1 billion in infrastructure spending, about 50,000 net tons of steel will be needed. Every trillion dollars invested in infrastructure has the potential to create 11 million jobs in the U.S. over the next decade, according to the American Iron and Steel Institute. This investment in infrastructure means steel demand, and thus met coal demand, is likely to be 1.5 times higher by 2050 than it is today.

The bold strokes we make to modernize our nation’s infrastructure must also include efforts to modernize and support our industrial base. Met mines will not only provide jobs and ensure the security of our domestic supply chain, but they will allow us to produce the vast amount of durable, affordable, sustainable steel needed to make the American Jobs Plan a reality.

The experiences enjoyed and memories made from Thanksgiving through New Years are why we call it the “most wonderful time of the year.” While... Read More

The United States is vulnerable to an energy crisis if we don’t carefully manage the energy transition. Europe’s own historic, self-inflicted... Read More

New Taxes and Fees Will Set Back U.S. Mining