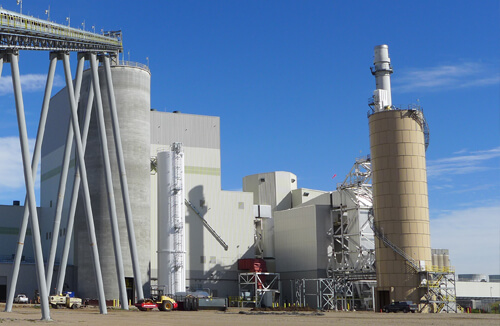 More electricity in North Dakota is generated with coal than with any other fuel. In fact, the state continues to be one of the country’s top coal-producing states, mining approximately 30 million tons every year since 1988.

Most of the region’s electricity is generated from lignite across seven power plants in North Dakota and one in eastern Montana. Fifteen years ago, the Lignite Energy Council created the Lignite Vision 21 Program as an endeavor to revitalize growth in the lignite industry.

Spiritwood is the first of its kind in North Dakota, producing both electricity and steam. Its primary fuel source is lignite coal, which has been converted to a higher-efficiency fuel using the company’s DryFiningTM technology to reduce the moisture content and remove dense particles from the lignite. Spiritwood Station also uses advanced technologies, including a circulating fluidized bed boiler; selective non-catalytic reduction technologies to reduce NOx emissions; a spray dryer absorber to reduce sulfur dioxide emissions; and a high-efficiency baghouse to collect particulate matter.

In addition to reduced emissions, lower transportation costs and lower maintenance costs, Spiritwood uses state-of-the-art technologies that make it one of the cleanest and most efficient coal-based power plants in the world.