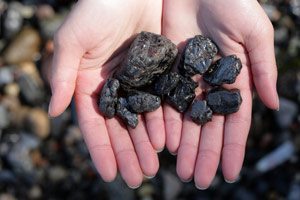 Around 40 percent of the country’s coal comes from this basin, located between southeast Montana and northwest Wyoming.

The modern Wyodak mine, a subsidiary of Black Hills Corporation, was established in the early 1920s. Today, it produces between 11,000 and 12,000 tons of coal daily. Much of that coal travels by conveyor belt to adjacent power plant customers, such as the Neil Simpson Complex.

The Wyodak Resources Development Corporation values its employees and is committed to safety. Employees at the mine have earned the Mine Safety Health Administration (MSHA) Sentinels of Safety Award numerous times. The award, now sponsored by the National Mining Association, recognizes the nation’s safest mines.

Along with their dedication to safety, Wyodak Resources Development Corporation employees work closely with government agencies to minimalize potential effects to the environment and neighboring communities.

Employees work hard to provide a reliable and sustainable source of electricity generation to fuel portions of northeastern Wyoming, southeastern Montana, and even the Black Hills region of South Dakota.

Reliable energy is an absolute necessity in our time. But some forms of energy generation are more consistently available than others. Relying... Read More

The Metal Behind Wind Power

Ur-Energy, Nuclear Energy to Rely On

LAS VEGAS – The National Mining Association (NMA) will gather today at MINExpo INTERNATIONAL® 2021 to honor outstanding achievements in mine safety and technology. Safety The NMA’s Sentinels of Safety Award recognizes coal and mineral mining operations in 10 categories for recording the most... Read More